Prospect evaluation of Ohio State RB Trey Sermon for the 2021 NFL Draft, which includes his strengths, weaknesses, and projection.

Can make cuts outside his frame when he’s not running at full speed.

Reacts very quickly to penetration and when blocking breaks down.

Good linear burst when going straight forward; long strider and gets to top speed rather quickly.

Scary and highly effective stiff-arm move, could be best in the class.

Lacks patience behind LOS; only concerned with getting downhill and doesn’t wait for blockers.

Ran inside zone and inside split zone almost exclusively at Ohio State.

Tunnel vision; sees backside lane when it’s there but that’s as widescreen as his vision gets.

One speed runner; could do a better job at pacing his runs to better use his burst to his advantage.

Unable to hit another gear once he’s at the 2nd and 3rd levels of the defense.

Limited reps as a receiver; used only on check-downs near LOS; unclear whether hands or body catcher.

Lean build. Transferred from Oklahoma to Ohio State for 2020 season. 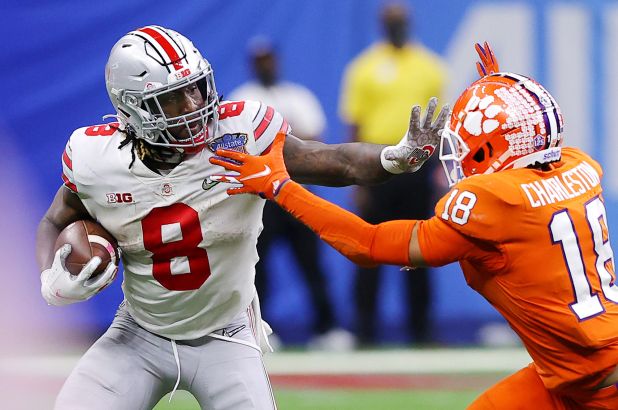 Trey Sermon projects as a Good early-down complementary player in a RB committee with starter upside. He’s at his best when running inside zone and inside split zone run schemes, but has the potential of being effective with other interior / one-cut schemes because of his excellent footwork and burst. He’s also a very aggressive runner despite not having elite power or strength at his disposal. His stiff-arm move is as great and effective as his footwork. It’s difficult to identify how much more room he has to grow on passing downs because he wasn’t used a ton in that area, but the tools are there for him to be a good pass blocker and a solid receiver near the LOS. Overall, Sermon may not have a high ceiling, but he can find a consistent role with a team as the primary run option.